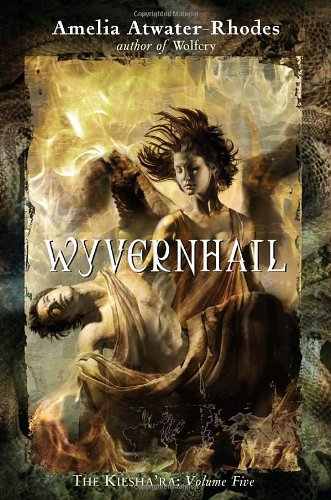 Wyvernhail
Amelia Atwater-Rhodes
HAI HAS ALWAYS been an outsider. With a falcon mother and a deceased cobra father, she is considered a mongrel by most, an ally by some, and a friend by few. Hai's broken falcon wings are a painful reminder of the life she once led on the island of Ahnmik. And here in Wyvern's Court, the avian and serpiente royal family keep their distance, refusing to acknowledge her cobra bloodline. They know that Hai's magic is so volatile, she can barely control it, and images of the past and future threaten to overwhelm her.When Hai's cousin, Oliza Shardae Cobriana, abdicates the throne of Wyvern's Court, Hai has visions only of destruction: the serpiente king Salem, dying in her arms; the dutiful guard, Nicias, unable to save a generation of children; and Wyvern's Court engulfed in flames.Now Hai will do anything to protect her new home - even if it means betraying the very people who need her most.
1 Vote

Once upon a time, in a land so far away we've not even heard of it... Hai, a young girl living under Wyvern's Court, is basically a rouge. Half-family with royalty, she's an exile- a half-breed. She was born to a falcon mother that forgot her and a cobra father who'd died years ago. Her magical powers are strong; although so strong, she can only partially control it. That is, with the help of her friend, Nicias, the royal guard, who'd saved her life once before.