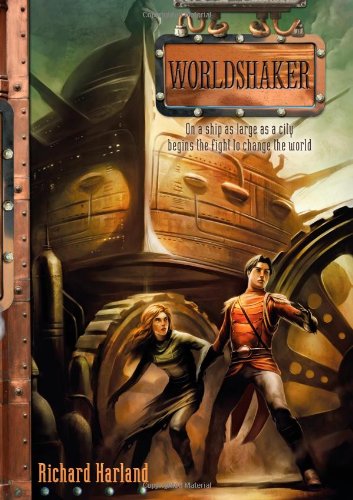 Worldshaker
Richard Harland
Col is a wealthy child of privilege. Raised to succeed his grandfather as the Supreme Commander of the juggernaut Worldshaker, he has lived a pampered life on the Upper Decks. He has never questioned his place in the world or his bright and illustrious future. But when a Filthy girl stows away in his cabin, suddenly nothing is clear anymore. Quick and clever, Riff is nothing like the Filthies that Col always learned about—the dumb, slow, less-than-human folk who toil away Below, keeping Worldshaker moving. Filthies are supposed to be animal-like, without the power of speech or the ability to think for themselves—but Riff is clever and quick and outspoken, and Col is drawn to her despite himself. As Col begins to secretly spend more time with Riff, he begins to question everything he was raised to believe was true, and realizes that if Riff is right, then everything he was raised to believe is a lie. And Col himself may be the only person in a position to do something about it—even if it means risking his future.
1 Vote

Filthies are nasty. Filthies are dumb. Filthies aren't human. This is what Colbert Porpentine has grown up learning. But after a midnight visit from a Filthie, Col learns that he may have been lied to his whole life. As Colbert becomes more involved with the Filthie girl, Riff, his eyes are opened to the horrible injustice occurring on "Worldshaker," the juggernaut that Col and his family and many others live on. A revolution is rising. Relatives aren't what they seem, and Colbert Porpentine just might be in the middle of it.