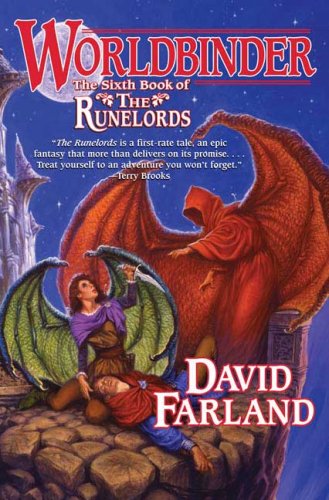 Worldbinder
David Farland
Certain works of fantasy are immediately recognizable as monuments, towering above the rest of the category. Authors of those works, such as George R.R. Martin, Robert Jordan, and Terry Goodkind, come immediately to mind. Add to that list David Farland, whose epic Runelords series continues now in Worldbinder. After the events of Sons of the Oak, Fallion and Jaz, the sons of the great Earth King Gaborn, are now living as fugitives in their own kingdom. Their former home has been invaded and secretly controlled by supernatural being of ultimate evil. The sons are biding their time until they can regain their rightful places in the land. Fallion seems destined to heal the world, and feels the calling to act. When he attempts to do so though, two entire worlds collapse into one, and nothing will ever be the same again.
1 Vote

Fallion has dreamed of healing the world for a long time now. But, when the time comes, he fails. For the first time, he starts to understand what might happen if he suceeds in binding the worlds together. But, he has other things to think about such as Lady Despair and her now stronger "minions". Still, is Fallion's flame-weaving skill and his friends courage and might enough to save the UNIVERSE?