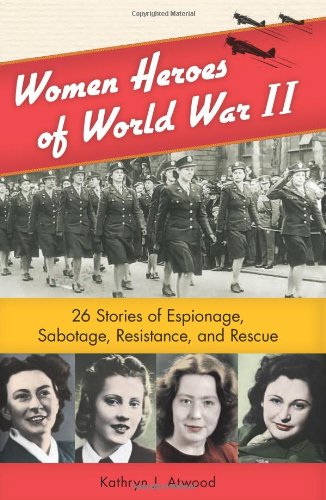 Women Heroes of World War II
Kathryn J. Atwood
A 2012 VOYA Nonfiction Honor List selection Noor Inayat Khan was the first female radio operator sent into occupied France and transferred crucial messages. Johtje Vos, a Dutch housewife, hid Jews in her home and repeatedly outsmarted the Gestapo. Law student Hannie Schaft became involved in the most dangerous resistance work--sabotage, weapons transference, and assassinations. In these pages, young readers will meet these and many other similarly courageous women and girls who risked their lives to help defeat the Nazis.            Twenty-six engaging and suspense-filled stories unfold from across Germany, Poland, the Netherlands, France, Belgium, Denmark, Great Britain, and the United States, providing an inspiring reminder of women and girls’ refusal to sit on the sidelines around the world and throughout history. An overview of World War II and summaries of each country’s entrance and involvement in the war provide a framework for better understanding each woman’s unique circumstances, and resources for further learning follow each profile. Women Heroes of World War II is an invaluable addition to any student’s or history buff’s bookshelf.
1 Vote

Women Heroes of World War II" is about twenty-six women and teenage girls who helped fight the Nazis. They joined Resistance groups, hid Jews, and distributed forbidden newspapers and pamphlets. This book starts with an introduction about the well-known heroes of World War II such as Winston Churchill and the troops who fought during that time. After the introduction, the book includes a background of each major country during the war. Finally, the book describes the individual stories of each woman or girl who acted as a hero during WW II with photographs beginning every account.