A War of Gifts 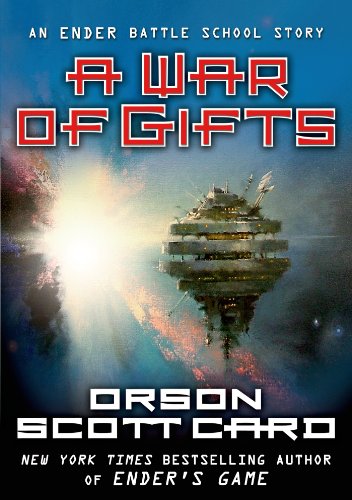 A War of Gifts
Orson Scott Card
Orson Scott Card offers a Christmas gift to his millions of fans with A War of Gifts, a short novel set during Ender Wiggin's first years at the Battle School where it is forbidden to celebrate religious holidays. The children come from many nations, many religions; while they are being trained for war, religious conflict between them is not on the curriculum. But Dink Meeker, one of the older students, doesn't see it that way. He thinks that giving gifts isn't exactly a religious observation, and on Sinterklaas Day he tucks a present into another student's shoe.This small act of rebellion sets off a battle royal between the students and the staff, but some surprising alliances form when Ender comes up against a new student, Zeck Morgan. The War over Santa Claus will force everyone to make a choice.THE ENDER UNIVERSE Ender series Ender’s Game / Speaker for the Dead / Xenocide / Children of the Mind / Ender in Exile / Children of the Fleet Ender’s Shadow series Ender’s Shadow / Shadow of the Hegemon / Shadow Puppets / Shadow of the Giant / Shadows in Flight The First Formic War (with Aaron Johnston) Earth Unaware / Earth Afire / Earth Awakens The Second Formic War (with Aaron Johnston) The Swarm / The Hive Ender novellas A War of Gifts / First Meetings
1 Vote

This novel is a short science fiction story designed mainly to entertain. The book is short and an easy read. It was a fairly serious story, but it has a few touching and sweet parts. It is set in the Ender series that Orson Scott Card created, probably in the middle of Ender's Game. In the book, a boy named Zeck is taken from his abusive Fundamentalist Christian family into Battle School due to his amazing memory. War, however, is against his pacifist views, but religion is against the rules at Battle School. He still refuses to participate in the mock battles.