The War To End All Wars: World War 1 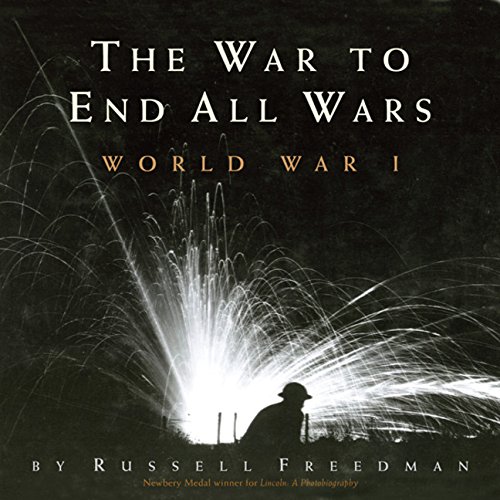 The War To End All Wars: World War 1
Russell Freedman
Product Description Nonfiction master Russell Freedman illuminates for young readers the complex and rarely discussed subject of World War I. The tangled relationships and alliances of many nations, the introduction of modern weaponry, and top-level military decisions that resulted in thousands upon thousands of casualties all contributed to the "great war," which people hoped and believed would be the only conflict of its kind. In this clear and authoritative account, the author shows the ways in which the seeds of a second world war were sown in the first. Numerous archival photographs give the often disturbing subject matter a moving visual counterpart. Includes source notes, a bibliography, and an index. Amazon Exclusive: A Letter from Russell Freedman, Author of The War to End All Wars Dear Amazon Readers, About three years ago, I attended the Broadway revival of R.C. Sheriff's heartbreaking World War I drama, Journey's End, first staged in London in 1928. As I watched the play, I was reminded that World War I was my father's war, and when I left the theater that evening, I had decided to write The War to End All Wars. In 1916, my father ran away from home, changed his name, lied about his age, and joined the United States army. He was 14 years old. Back then, before social security numbers and computerized record keeping, it wasn't difficult to take on a new identity, and that's exactly what my father did. To begin with, he was sent to the Mexican border to fight Pancho Villa under General John J. Pershing. And when the United States entered World War I, he sailed to France with the 7th Infantry Division. In the fall of 1918, he was shot and gassed, and he spent several months recovering at Walter Reed Army Hospital in Washington, D.C. My father was proud of his service to America, and I grew up hearing nostalgic stories of his adventures as a teenage soldier. But as I eventually learned, the war's reality presented quite a different tale. This was the first global conflict to employ modern weapons--long-range artillery, rapid-fire machine guns, poison gas, flamethrowers, tanks, and airplanes that bombed and strafed--the first war in which modern weapons inflicted mass slaughter, introducing new kinds of terror and record levels of suffering and death. It was now possible to kill your enemy at distance, without seeing him. Called the Great War at first, because of its massive and unprecedented scale, the conflict later was known as the War to End All Wars, because it was unthinkable, unimaginable, that humanity would allow such carnage to be repeated ever again. While I was working on my book, I spent a sunny autumn morning at the Meuse-Argonne American cemetery in France, the burial place of some 14,000 war dead, most of whom fell during the U.S. Army's Argonne Forest offensive in the fall of 1918. The graves are still visited, often by the grandchildren and great-grandchildren of the men buried there. Scattered among the long rows of crosses and occasional stars of David, bouquets of fresh flowers and notes of remembrance pay tribute to those who gave their lives nearly a century ago. As I read the names on some of the headstones, I was uncomfortably aware that if my wounded father had ended up in that cemetery, I never would have existed. Some distance away, near Verdun, I visited a burial place of quite a different kind. During the year-long Battle of Verdun, a group of French soldiers in a trench were buried alive when a German artillery shell exploded nearby. Those men have never been disinterred. Today, the earthen mound covering their remains is a lovingly tended shrine. Rising from the mound, pointing skyward and glinting in the sunlight, the tips of the dead soldiers' bayonets can still be seen. It was said at the time that if the war could just once be described in honest and accurate language, people everywhere would demand that the fighting be stopped. That challenge was taken up by many ordinary soldiers of World War I, the men in the trenches, who recorded their experiences under fire in letters, diaries, journals, and memoirs that provide us today with eyewitness accounts of what it was like to fight in the War to End All Wars. Sincerely, Russell Freedman (Photo © Evans Chan)
1 Vote

Tweet
The War To End All Wars: World War 1 review by JOC

The War To End All Wars: World War 1 by Russell Freedman deals with the entire story of World War 1. This book contains the reasons that prompted the war, and the events that ended the war, as well as interesting stories that happened during the war. Readers will find out why World War 1 was the first war where individual countries were capable of inflicting millions of casualties upon each other. You will also learn some things about how World War 1 flowed into World War II. There are powerful pictures here, taken during the war, some of actual battles.