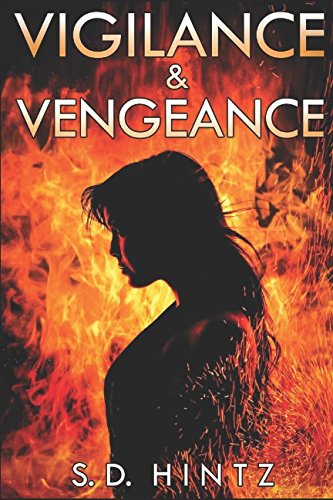 Vigilance & Vengeance
S.D. Hintz
Eighteen-year-old Seanna had a face that was hard to forget. A blood red birthmark emblazoned across her chin is the reason why. It made her the target of taunts from bullies and the bane of the headmistress of the orphanage where she lived since birth. Her mark possesses a fiery flair she struggles to control. Consumed by a pyrokinetic ability she can either learn to control it or let it control her. Her Bitter Birthday brings the opportunity to be adopted by a real family, or so she believes. The Trident, the governing dictatorship, has found the solution to their budgetary shortfall – orphanages have replaced schools and slave houses have replaced homes. And Seanna has just had her introduction to the world outside the safety and comfort of the orphanage. A world where young adults are abused and chained in the mines as slaves of the tyrannical Trident. Using her Fiery Cinder she escapes and meets a young revolutionary hell-bent on change. He leads her in a charge against the Witch he believes to be the cause of the breakdown of the family unit – Amethyst, who also happens to be Seanna’s new adoptive “mother.” Bought and paid for by Amethyst, Seanna reels against the truth – she was given the Cinder to be the weapon that can overthrow the Trident and bring a new day to the Fourth Quarter. In a world where no one can be trusted can she trust herself to save the world or will she be the one to end it?
1 Vote

Seanna has had a dark red birthmark on her chin her whole life. As much as she hates it, she’s learned that people judge her based on the mark on her face. But behind that birthmark lies an unbelievable amount of power. Her birthmark gives her pyrokinetic abilities that Seanna has no idea how to control. And on top of that, she has outgrown the orphanage that's been her only home. Forced to leave, she can only imagine what comes next from the rumors she heard while growing up. Will Seanna learn how to control her powers once and for all?