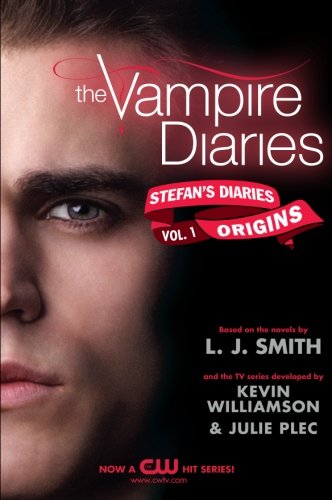 The Vampire Diaries (Stefan's Diaries): Origins
Julie Plec, Kevin Williamson, L. J. Smith
The first book in the New York Times bestselling series by L.J. Smith.Origins is the first book in L.J. Smith’s bestselling Stefan’s Diaries series, which reveals the backstory of brothers Stefan and Damon from The Vampire Diaries series. This paperback features cover artwork from the hit CW TV series The Vampire Diaries, starring Nina Dobrev, Paul Wesley, and Ian Somerhalder. Set in mid-19th century Mystic Falls, Virginia, three teenagers enter a torrid love triangle that will span eternity. Brothers Stefan and Damon Salvatore are inseparable until they meet Katherine, a stunning, mysterious woman who turns their world upside down. Siblings turned rivals, the Salvatores compete for Katherine’s affection, only to discover that her sumptuous silk dresses and glittering gems hide a terrible secret: Katherine is a vampire. And she is intent on turning them into vampires so they can live together—forever.Full of dark shadows and surprising twists, the first book in the New York Times bestselling Stefan’s Diaries series raises the stakes for the Salvatore brothers as they face new loves, old treacheries, and unimaginable threats. Fans of L. J. Smith’s New York Times bestselling Vampire Diaries series as well as the hit television show won’t be able to put the latest Salvatore adventure down.
1 Vote

The Vampire Diaries Stefan Diaries Origin takes place in Mystic Falls, Virginia during the Civil War in the year 1864. Seventeen year old Stefan Salvatore is engaged to Rosalyn a girl whom he is not in love with. Stefan and his best friend Damon are inseparable until they meet Katherine, a girl who has come to live with them. They both fall in love with the stunning, mysterious, seductive, and beautiful Katherine and are rivals for her affection. However, Katherine harbors a secret. She is a vampire.