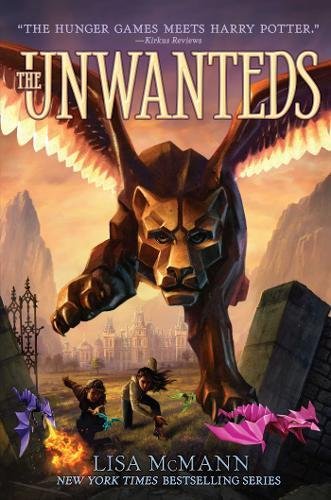 The Unwanteds
Lisa McMann
Every year in Quill, thirteen-year-olds are sorted into categories: the strong, intelligent Wanteds go to university, and the artistic Unwanteds are sent to their deaths Thirteen-year-old Alex tries his hardest to be stoic when his fate is announced as Unwanted, even while leaving behind his twin, Aaron, a Wanted. Upon arrival at the destination where he expected to be eliminated, however, Alex discovers a stunning secret--behind the mirage of the "death farm" there is instead a place called Artime. In Artime, each child is taught to cultivate their creative abilities and learn how to use them magically, weaving spells through paintbrushes and musical instruments. Everything Alex has ever known changes before his eyes, and it's a wondrous transformation. But it's a rare, unique occurence for twins to be separated between Wanted and Unwanted, and as Alex and Aaron's bond stretches across their separation, a threat arises for the survival of Artime that will pit brother against brother in an ultimate, magical battle.
1 Vote

Thirteen year old Alex is an Unwanted. Therefore he is doomed to die. Or so he and the rest of the country of Quill think. But the Unwanteds are taken to the magical world of Artime, home to decades of Unwanteds. There they learn to use art magic, as a harmless tool and as a deadly weapon. When Alex makes the mistake of contacting someone in Quill, he puts Artime in grave danger. Can Alex save his newfound home and friends? He has one chance to try, or theyll be gone, forever.