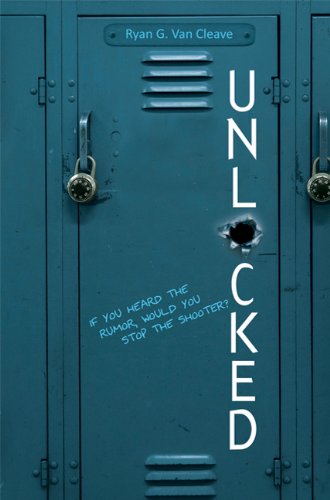 Unlocked
Ryan G. Van Cleave
Winner of the 2011 Florida Book Awards Gold Medal for Young Adult Literature. Winner of the 2012 Florida Publishers Association Gold Medal in Young Adult Literature.Andy is the janitor's son, an outcast, a nobody. Then the rumor starts-that Blake has a gun in his locker. In a moment of misguided hopefulness, Andy steals the keys from his dad and opens up Blake's locker, hoping that finding the gun will change his own status. But the gun isn't there and Andy remains an outcast. When an unlikely friendship develops between the two loners, Blake shares most of his secrets with Andy, including the gun. But there's one secret that worries Andy more than anything-the date circled on Blake's calendar. Does Blake have something planned? Something that Andy can prevent? In a fascinating look at how teens deal with the now constant threat of school violence, debut author Ryan G. Van Cleave provides a unique, emotional perspective on how it feels to be the one who can prevent a tragedy.
1 Vote

When Andy finds out that there may be a gun in his school he is determined to see if the rumors are true. At first he hesitates to steal his father's janitor keys, but finally he does and is surprised to see what lies in Blake's locker: nothing. Could it be too late? Would he have to try to save someone he didn't even know before these rumors started? This gun seems to bring the two boys together and after a few days of playing video games and sitting together at lunch they form a friendship.