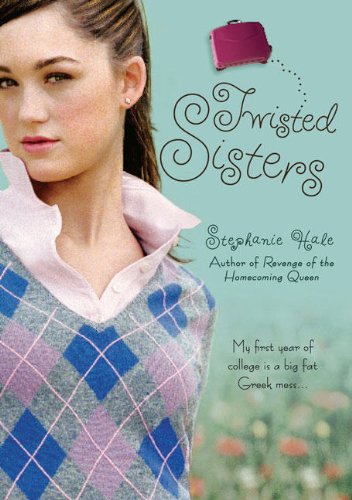 Twisted Sisters
Stephanie Hale
Revenge of the Homecoming Queen's Aspen Brooks is a freshman in college- and finding it one big fat Greek mess. After Aspen Brooks's senior year of slashed tires and kidnapping, college seemed like the dream deal of the decade-especially with Detective Harry Malone footing Aspen's tuition and paying her to join the most elite sorority, The Zetas. To top it off, Aspen's hottie bf Rand is at the same school! If only she had time to hang out. Instead, she has to investigate the mysterious attempted suicide of the detective's niece, Mitzi. Harry suspects foul play, and judging by some of the secrets Aspen's sorority sisters are hiding, she has to agree. Rand is jealous of her newfound Greekdom and is spending a lot of time with a skank-ilicious redhead. Meanwhile his rich roommate has fallen psychotically in love with Aspen. She's starting to get the idea that not everyone appreciates her fabulous presence. Even some people that call themselves her 'sisters' could be out to get her.
1 Vote

Twisted Sisters by Stephanie Hale is and amazing love/mystery book. It is about an eighteen-year-old girl named Aspen Brooks who keeps finding herself solving mysteries. Aspen is a total twirly girly with a capital "TG" who is starting college at the local community college. This book tells you all about Aspen, her hot boyfriend, her incurable diseases and the lunatic, stalking, psychotic boys who fall in love. While at the school Aspen joins a sorority so that she can try to figure out what happened to the member who went missing last semester.