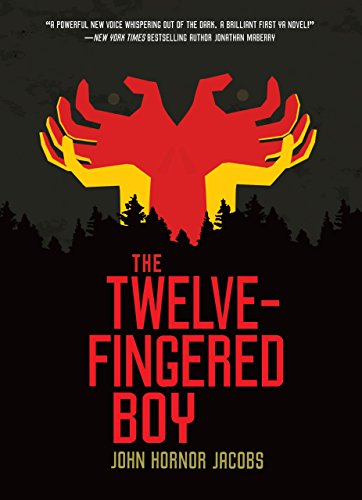 The Twelve-Fingered Boy (The Twelve-Fingered Boy Trilogy) [
John Hornor Jacobs
Fifteen-year-old Shreve Cannon doesn't mind juvie. He's got a good business dealing contraband candy, and three meals a day are more than his drunk mother managed to provide. In juvie, the rules never change and everyone is the same. In juvie, Shreve has life figured out. Then the new fish shows up. Jack's a quiet kid. Small. Cries himself to sleep too. He's no standard-issue titty-baby, though. There's his hands--more specifically his fingers, all twelve of 'em. And when he gets angry, something weird happens. The air wavers. You feel a slight pressure in your chest. And then…well, best take cover. Jack isn't the only new face in juvie. There's Mr. Quincrux. Quincrux has an unusual interest in Jack and Shreve, and it quickly becomes clear that innocent bystanders aren't going to get in his way. So Jack and Shreve bust out. On the lam, they quickly discover that Jack has abilities--hell, superpowers--that might just give them a fighting chance against Quincrux, if they can stay alive long enough to figure them out.
1 Vote

In Casimir Pulanski Juvenile Detention Center, there is a boy named Shreve. He sells candy, which is (of course) against the rules. One day, he gets a new roomate named Jack who has 2 extra fingers and 2 extra toes. He also has powers, that certain people want to train him to use. Shreve and Jack decide to escape from these people, which means escaping from Juvie.

This book, by John Horner Jacobs, is about them running, and figuring things out about themselves, and just trying to survive.