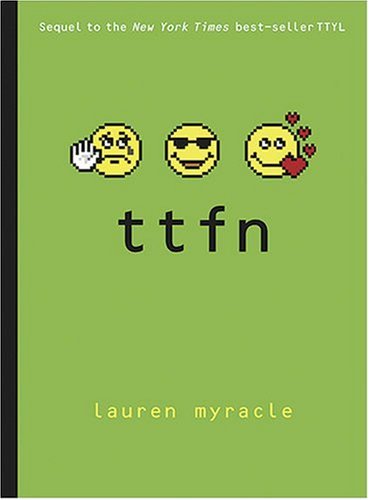 ttfn
Lauren Myracle
Sequel to the New York Times best-seller ttylThis sequel to the breakout bestseller, ttyl (a novel told entirely in instant messages), follows Maddie, Zoe, and Angela through their next year in high school, 11th grade. There's trouble and lots of IMs ahead for the Winsome Threesome. Angela has just found out that her family is moving to El Cerrito, California, and she seriously doesn't know how she'll survive without her best friends. Maddie makes some really bad moves with Clive, a pot-smoking hipster who wants to be "friends with benefits." And Zoe finds herself falling for Doug, the sweet poet who has had a crush on Angela forever, a crush that Angela has come to count on. Lauren Myracle has concocted another funny, touching look at the rocky road of real friendship--bumpy, nutty, and marshmallow-sweet. Praise for ttyl "Perfectly contemporary" -Kirkus*"Revealing and innovative, this novel will inspire teens to pass it on to their friends." --School Library Journal (starred review)
1 Vote