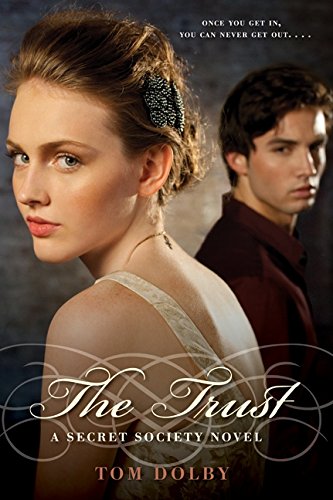 The Trust
Tom Dolby
Who can you trust when everything is secrets and lies?It's a new semester at the Chadwick School, and even with the ankh tattoos that brand them, Phoebe, Nick, Lauren, and Patch are hoping for a fresh start. Each day, however, they are reminded of their membership as new Conscripts in the Society. The secret group that promised to help them achieve their every dream has instead turned their lives into a nightmare.Exclusive membership lost its luster as the Society revealed its agenda to them and two of their classmates were found dead. Now they can't help but wonder: Who's next? While they search for the elusive truth about the Society, the Conscripts are forced to face their darkest fear—that they truly can't get out.Will Nick and Phoebe's new relationship endure this strain? Can Patch and Nick's longtime friendship survive the truth that will come to light? The deceptions of the group's leaders, once trusted friends, and family will test these four as they fight to leave the Society behind.The Trust, Tom Dolby's sequel to secret society, is an alluring glimpse behind the facade of a life of entitlement, where secrets aren't merely fun—they're deadly.
1 Vote

The Trust by Tom Dolby is about this group of friends, Patch, Nick, Phoebe, Lauren, and Thad, in a cult-like society called The Society. All the prestigious families of New York City are part of it. These teenagers desperately want to get out of the Society because it is ruining their lives. To the outside world, the Society is good, but once you're in you realize what the Society is really about. Will they be able to get out without too much trouble?