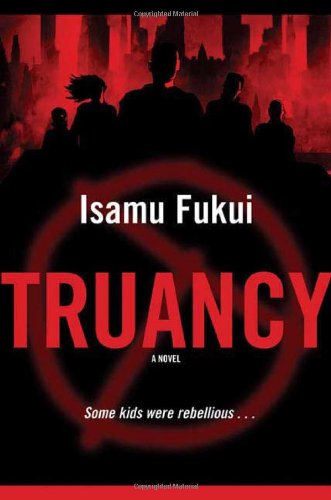 Truancy
Isamu Fukui
In an alternate world, in a nameless totalitarian city, the autocratic Mayor rules the school system with an iron fist, with the help of his Educators. Fighting against the Mayor and his repressive Educators is a group of former students called the Truancy, whose goal is to take down the system by any means possible—at any cost. Against this backdrop, fifteen-year-old Tack is just trying to survive. His days are filled with sadistic teachers, unrelenting schoolwork, and indifferent parents. Things start to look up when he meets Umasi, a mysterious boy who runs a lemonade stand in an uninhabited district. Then someone close to Tack gets killed in the crossfire between the Educators and the Truants, and Tack swears vengeance. To achieve his purpose, he abandons his old life and joins the Truancy. There, he confronts Zyid, an enigmatic leader with his own plans for Tack. But Tack soon finds himself torn between his desire for vengeance and his growing sympathy for the Truants…. Isamu Fukui wrote Truancy during the summer of his fifteenth year. The author’s purpose is not just to entertain, but to make a statement about the futility of the endless cycle of violence in the world as well as the state of the educational system. And, as he put it, “I need to be in school myself if I want to write about it.”
1 Vote

In the experimental City, the tyrannical Mayor and his Educators strive to make each citizen a docile, complacent member of society by controlling education. However, a group of outcast students, called the Truancy, arises to fight the Educators for control. Caught in the midst of the battle is Tack, one of the many students oppressed by the school system. When Tack meets Umasi, he finds relief and listens to Umasi's wisdom. Umasi becomes his mentor, training him physically and mentally for challenges ahead.