They Call Themselves The K.K.K. 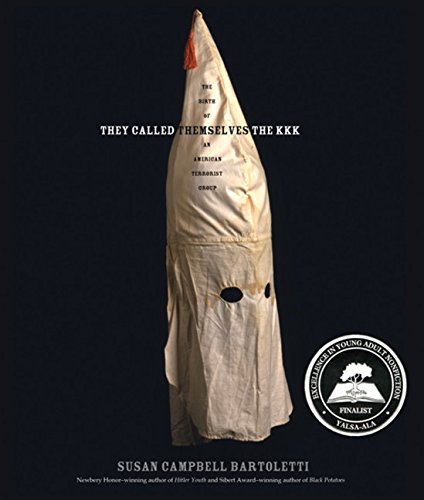 They Call Themselves The K.K.K.
Susan Campbell Bartoletti
Boys, let us get up a club.With those words, six restless young men raided the linens at a friend’s mansion, pulled pillowcases over their heads, hopped on horses, and cavorted through the streets of Pulaski, Tennessee in 1866. The six friends named their club the Ku Klux Klan, and, all too quickly, their club grew into the self-proclaimed Invisible Empire with secret dens spread across the South.This is the story of how a secret terrorist group took root in America’s democracy. Filled with chilling and vivid personal accounts unearthed from oral histories, congressional documents, and diaries, this account from Newbery Honor-winning author Susan Campbell Bartoletti is a book to read and remember. A YALSA Award for Excellence in Nonfiction for Young Adults Finalist.
1 Vote

Tweet
They Call Themselves The K.K.K. review by APB

Lynch, betray, murder -- this is what several shameless people decided to do to harmless civilians of a different race. They Called Themselves the K.K.K. provides hefty amounts of information about how the Ku Klux Klan was created and about the people they affected. Surprisingly enough, the basis of the KKK wasn't formed to destroy African Americans and most other races or religions. It was created as a clan that would joke around and crash parties at night. This is just tidbit that readers will find surprising in this book.