The Sweetheart of Prosper County 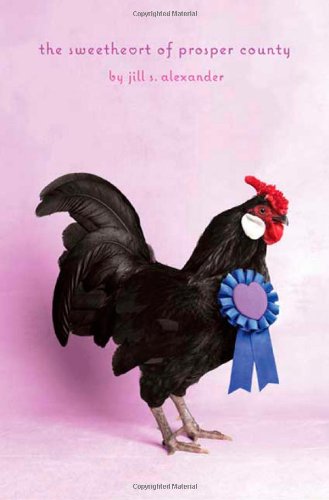 The Sweetheart of Prosper County
Jill S. Alexander
Almost-15-year-old Austin Gray is tired of standing at the curb and watching the parade pass her by. Literally. She decides this is the year she’ll ride on the hood of a shiny pickup truck in the annual parade, waving to the crowd and finally showing the town bully that she’s got what it takes to be the Sweetheart of Prosper County.  But far from simply being a beauty contest, becoming Sweetheart involves participation in the Future Farmers of America (FFA), raising an animal, and hunting or fishing. Austin will do almost anything to become Sweetheart, and has the support of her oldest friend, Maribel, her new FFA friends (including the reigning Sweetheart, and a quiet, cute cowboy), an evangelical Elvis impersonator, a mysterious Cajun outcast, and a rooster named Charles Dickens. If only her momma would stop overprotecting her, and start letting Austin live her own life. But Austin can’t move on until Momma moves on, too—and lets the grief of losing Austin’s daddy several years before out into the open. Here is a bighearted story that will leave readers agreeing with Austin that sometimes, it’s not what you ride, it’s how you roll.
1 Vote

Tweet
The Sweetheart of Prosper County review by MHock

"The Sweetheart of Prosper Country" is a touching story about a young girl who overcomes emotional struggles. Austin Gray is a fifteen year old girl who resolves to be the Sweetheart of Prosper County so she can be the center of the annual parade in her small town. She joins the Future Farmers of America, raises a rooster named Charles Dickens, and tries to get over the death of her father that occurred a few years before. Austin resolves to prove her town and the stuck up boys and girls her age that she is worth something.