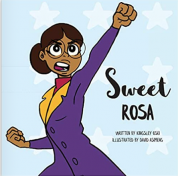 Sweet Rosa is a picture book that details the brave stance of a young African-American woman named Rosa Parks who refused to give up her seat to a white person on a bus in 1955 in Montgomery, Alabama. Ms. Parks' actions led to the infamous Montgomery bus boycott and helped establish the civil rights movement led by Dr. Martin Luther King Jr. The bold and courageous act of Ms. Parks, Dr. King and thousands of boycotters and civil rights advocates eventually pushed the Supreme Court to declare segregation on buses unconstitutional, helping to put racial discrimination to rest. This book takes young readers on a historic, illustrious journey through this staple event and how it has forever shaped the racial outlook of equality for adults and children alike in today's society.