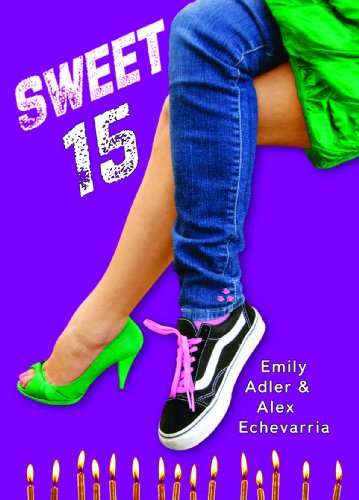 Sweet 15
Emily Adler
Destiny Lozada is turning fifteen, and her parents want to throw her a traditional quinceaÃ±era, celebrating her transition into "womanhood" with a religious ceremony, a big expensive party, a silly dress and tiaraâthe works. Destiny’s older sister calls it an antiquated, misogynistic ritual that just gives their mother a chance to show off. As usual, Destiny is caught in the middle and afraid to say anything. She’s not a princesa like her mother imagines or an activist like her sister. So who is she? Destiny isn’t sure yet, but she knows she’d rather be watching TV, riding her skateboard, and confiding to her cat and her stuffed bear. She also wouldn’t mind finding the guy of her dreams to be her escort for the quince. . . . When the plans, bills, and fights start piling up, Destiny has to stop being a spectator to "The Lozada Show" and take a stand once and for all in her family and her life. In their first novel written together, these talented co-authors bring a male and female perspective to the story.
1 Vote

In three months, Destiny Lozado will turn fifteen. In a Latino household, this means the countdown begins for a Quinceñara, or big fifteenth birthday celebration. However, Destiny is not sure this is how she wants to celebrate. Her mother wants her to have a girly Quinceñara complete with a fancy dress and caballero (male escort). Destiny's sister, America, is fighting tooth and nail against her mother to prevent Destiny's Quinceñara.