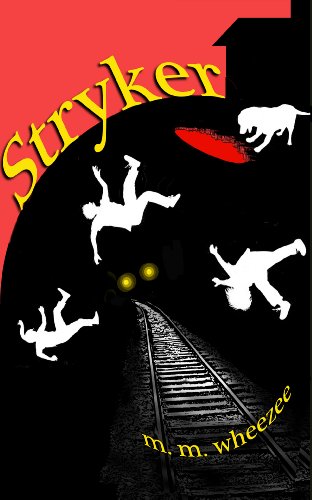 Stryker
M. M. Wheezee
"Stryker" is a middle-grade novel, for ages 9 and up.Since his mom died a few years ago, Harold Stryker has been following her instructions: He lives all alone, in secret, in his house outside Los Angeles. He avoids, as best as he can, other kids, and certainly grown-ups. He keeps only his huge, gassy dog and his collection of power tools for company. But he's okay with all that. Until the big night of the little earthquake. And his plunge into a dangerous forgotten tunnel beneath his dining room floor. And his encounter with the sweet, terrifying girl baseball star named Tien Tang and the compulsive, camo-suited, overweight force of nature known officially as Bella but universally as Blunt. They push and pull him through an underground adventure with a bullying science teacher, a tasteless chef, a greedy criminal, hairy tarantulas (live), sabertooth cats (long dead), smelly mushrooms, old trolley cars, new subways, and a baker's dozen of illegal Asian immigrants who need to be rescued from a life of slavery in a California ghost town. Harold Stryker is okay with all that too. But those two girls are now his friends. And that has him shaking.
1 Vote

Stryker is about a young boy who has lost everything in his life. He has lost his mother, hope, social standings, and more. But one day, an earthquake strikes Los Angeles and his whole world in turned upside down. After the earthquake, he drops below his dining room into a mysterious past. Harold Stryker enounters a dozen chinese immigrants who need to get out of slavery, a baseball playing girl, and a secret that will change his life.