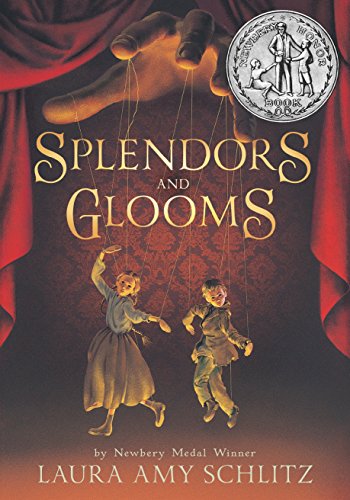 "Winner of the Newbery Honor award, Splendors and Glooms will captivate middle grade readers with mystery, fantasy, magic and friendship in a Victorian gothic setting." - Seira Wilson, Amazon EditorNewbery Medalist Laura Amy Schlitz brings her sorcery to a Victorian gothic thriller — an enthralling, darkly comic tale that would do Dickens proud.The master puppeteer, Gaspare Grisini, is so expert at manipulating his stringed puppets that they appear alive. Clara Wintermute, the only child of a wealthy doctor, is spellbound by Grisini’s act and invites him to entertain at her birthday party. Seeing his chance to make a fortune, Grisini accepts and makes a splendidly gaudy entrance with caravan, puppets, and his two orphaned assistants. Lizzie Rose and Parsefall are dazzled by the Wintermute home. Clara seems to have everything they lack — adoring parents, warmth, and plenty to eat. In fact, Clara’s life is shadowed by grief, guilt, and secrets. When Clara vanishes that night, suspicion of kidnapping falls upon the puppeteer and, by association, Lizzie Rose and Parsefall. As they seek to puzzle out Clara’s whereabouts, Lizzie and Parse uncover Grisini’s criminal past and wake up to his evil intentions. Fleeing London, they find themselves caught in a trap set by Grisini’s ancient rival, a witch with a deadly inheritance to shed before it’s too late. Newbery Medal winner Laura Amy Schlitz’s Victorian gothic is a rich banquet of dark comedy, scorching magic, and the brilliant and bewitching storytelling that is her trademark.
2 Votes

Clara Wintermute loves the puppet show Grisini and his apprentices put on. As the only surviving child of a wealthy doctor, Clara usually gets her way. But when she asks her parents to have Grisini perform at her birthday party, she has to throw a fit to get them to say yes. After Clara's party, where Grisini performs, her mother gets mad at Clara for her actions during the party. After going to bed, Clara decides to sneak out as a result of her mother’s disappointment in her. When Clara ends up missing the next morning, Grisini is blamed for kidnapping her.

What's this?
Splendors and Glooms review by dancechicka