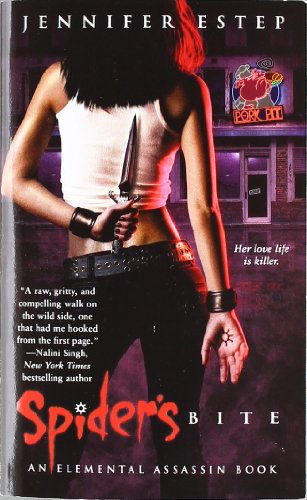 Spider's Bite
Jennifer Estep
Follow Gin Blanco, a kick-butt female assassin who moonlights at a BBQ joint in Tennessee, as she searches for the person who double-crossed her in this heart-pounding and fresh paranormal romance series. After Gin’s family was murdered by a Fire elemental when she was thirteen, she lived on the streets and eventually became an assassin to survive. Now, Gin is assigned to rub out an Ashland businessman, but it turns out to be a trap. After Gin’s handler is brutally murdered, she teams up with the sexy detective investigating the case to figure out who double-crossed her and why. Only one thing is for sure—Gin has no qualms about killing her way to the top of the conspiracy.
1 Vote

Gin is an assassin. She kills people for a living, anyone that someone else wants dead she kills; as long as they can pay that is. Then she gets a seemingly easy assignment one that ends up with her double crossed by a client who kills her handler. Gin has to partner up with an honest cop, one of the few, who hates her for killing his partner. Oh, and everyone in her world has a magical connection to the elements.