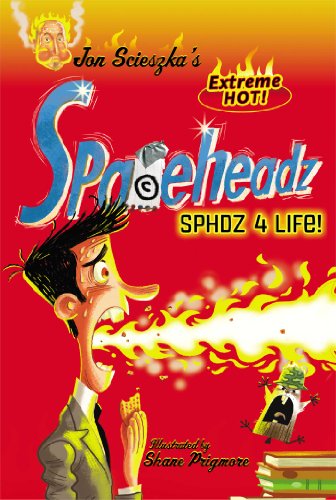 Spaceheadz (SPHDZ 4 Life)
Shane Prigmore, Jon Scieszka
Don’t miss the stunning, riveting, hilarious, and 100% fresh conclusion to the interactive Spaceheadz saga!The SPHDZ accomplished their goal of recruiting 3.14 million and one SPHDZ. But the brainwave has been stolen by the chief of the Anti Alien Agency, and it’s up to Michael K., the SPHDZ, and their allies to get it back. With three potential Chief sightings, the team is spread around the world, leaving Michael K., Venus, TJ, and the SPHDZ to hold down the fort and finish fifth grade. But with a mysterious new principal and graduation fast approaching, will they be able to find the missing brainwave before the Chief uses it to destroy a planet?
1 Vote

This is the 4th and final book in the Spaceheadz series.  The SPHDZ has met their recruiting goal, but now the brainwave has been stolen.  The main character, Michael, and the SHDZ need to find out who took the brainwave and retrieve it.

They know who took the brainwave but they are not sure where to find him, and sightings have been few and spread throughout the world.

Michael and his friends need to stay behind and finish the 5th grade.  Meanwhile there are weird things going on at their school.  Even their new principal is acting strange!