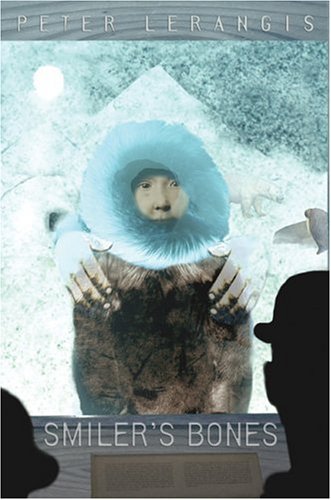 Smiler's Bones
Peter Lerangis
A striking, fascinatingly told novel based on the harrowing true story of Minik, an Eskimo boy seized in the name of exploration and brought to New York at the beginning of the 20th century.In 1897, famed explorer Robert Peary took six Eskimos from their homes in Greenland to be "presented" to the American Museum of Natural History. Among the six were a father and a son. Soon, four were dead, including the father (whose bones, unbeknownst to the son, were put on display). One returned to Greenland. And the other -- the young boy -- remained, the only Eskimo in New York for twelve years. His name was Minik. This is his story. A story of lies and deceptions. A story about the price of exploration. A story about discovering the truth of a culture.
2 Votes

Famous Artic explorer, Robert Peary, takes a young Eskimo, Minik, and five other Eskimos from their native land. Peary brings them to New York City to be presented at the American Museum of Natural History. They are treated like circus acts, and soon four of the six Eskimos are dead including Minik's father, Smiler. Out of the two remaining, one goes back to Greenland, leaving Minik in New York City. The story tells of the unjust way Minik was treated and how it ruined his life forever.

Smiler's Bones, by Peter Lerangis, is a story about an Eskimo named Minik. Minik and five other Eskimos, including Minik's father Qisuk ("Smiler"), travel from Greenland to America with the explorer Robert Peary. In America, the Eskimos become a living exhibit at the American Museum of Natural History in New York City. Within ninety-six days, four of the six Eskimos, including Qisuk, are dead. Not long after, one leaves America to return to Greenland, leaving Minik to be the only Eskimo living in New York.