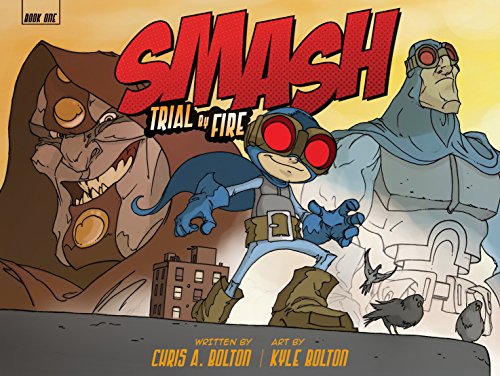 Smash: Trial by Fire
Chris A. Bolton, Kyle Bolton
Whap! Thud! Crash! An action-packed graphic novel simultaneously spoofs and pays tribute to superhero lore while inspiring a new generation of crimefighters.Ka-boom! Clobbered by fallout from a blast that kills the local superhero, Defender, Andrew Ryan suddenly has super strength and speed! And he can fly! Now it’s up to him to protect citizens from thieves, thugs, and fearsome villains. He dons a homemade costume to hide his true identity, and Smash is born! But fighting crime isn’t easy, especially when you’re in fifth grade. On top of evil robots and trigger-happy bank robbers, there’s homework, curfew, and the school bully to deal with. Not to mention the Magus, a fearsome villain who will stop at nothing to steal Smash’s superpowers for himself! Influenced by film, cartoons, and of course, classic comic books, this vivid escapade features a rib-tickling, high-energy storyline and the colorful, exaggerated figures of nostalgic comic-book art: a combo perfect for kids longing for a secret identity of their own.
1 Vote

SMASH Trial by Fire is a book about 9-year-old Andrew Ryan who dreams that someday he’ll be like the superhero, Defender.  When a freak accident occurs, thanks to the Magus, Defender’s number one enemy,  Defender gets killed and his powers are transferred to Andrew.  Now Andrew can fly and has super strength, but is almost clueless on how to use these abilities.  With no Defender, Andrew is the new superhero named Smash.  It is up to Andrew to save his hometown and stop Magus.  Can he master his powers?  Can he survive?  Find out in this g