The Sisters Grimm Book Four: Once Upon a Crime 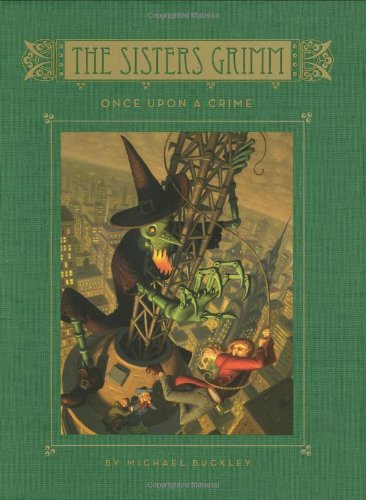 The Sisters Grimm Book Four: Once Upon a Crime
Michael Buckley, Peter Ferguson
In the long-awaited fourth book in the New York Times bestselling series, the Grimms take on New York City! Surprises abound for Sabrina and Daphne Grimm, fairy-tale detectives extraordinaire. When they venture into the big city, they stumble upon a murder, face betrayal by a friend, and discover an amazing secret about their mother, Veronica. Sabrina just wants to be normal—no detecting, no dangerous escapes, and especially no Everafters. Unfortunately, New York City is a hiding spot for many famous fairy-tale folk. And there’s a murderer in their midst! The girls and their friends must figure out who killed Puck’s father, King Oberon, while coming to terms with their mother’s secret life. Will they stop the murderer before he or she can strike again? And will Sabrina ever accept her family’s destiny? The colorful world of the Grimms expands in new and hilarious directions in Once upon a Crime. Critics and readers alike have embraced the Sisters Grimm series and its independent, quick-thinking heroines.
1 Vote

Tweet
The Sisters Grimm Book Four: Once Upon a Crime review by EM

The Grimm sisters, their grandmother Relda, Puck and Mr. Hamstead (one of the Three Little Pigs) are off to New York City! Puck is very sick from his injury at the end of the third book of this series, and the Grimm gang need to find their way into the Faerie kingdom in order to find his fairy family who can help heal Puck. They arrive at their destination, but soon everything is mayhem when a murder occurs, and the Grimm detective sisters Sabrina and Daphne are once more thrown into the search for a criminal.