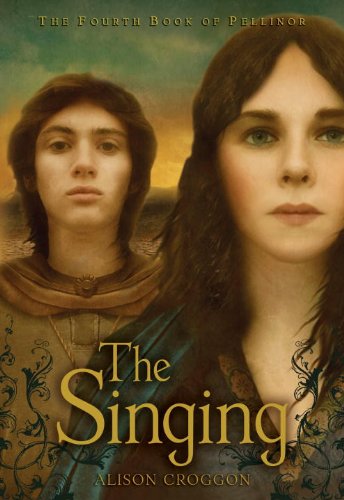 The Singing
Alison Croggon
Now in paperback! The climactic volume of the epic quartet follows the Bards of Edil-Amarandh on a vital quest to merge their powers against a nameless evil. (Age 12 and up)In a battle-ravaged land, Maerad, Cadvan, and Hem desperately search for one another as they make their separate journeys. The Black Army is advancing, and all of the Seven Kingdoms are threatened with devastating defeat. Yet in Maerad and Hem lives the secret to the mysterious Singing, and legend holds that if they release the music of Elidhu together, they have the power to defeat the Nameless One. Can brother and sister find each other in time—and are they strong enough, even reunited—to defeat the supreme enemy before all is lost?
1 Vote

The Singing by Alison Croggon is the fourth and final book in the Books of Pelinor series. It begins were the last book in the series left off. Maerad and Hem are traveling to Edil-Amarandh in search of one another. Maerad and her companion first go to the boarding school of Innail, while Hem and his companion Saliman journey north, attempting to flee the Black Army. A prophecy has been spoken over them which says they will release the Treesong, which is the only way to conquer the Nameless One and defeat the forces of darkness.