As Simple As Snow 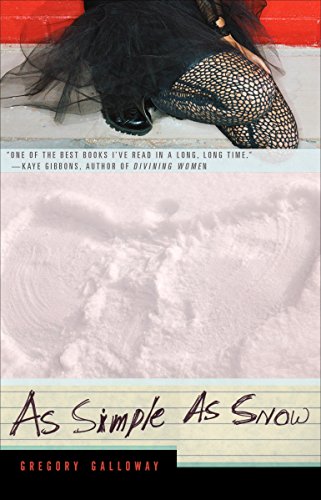 As Simple As Snow
Gregory Galloway
"Anna Cayne had moved here in August, just before our sophomore year in high school, but by February she had, one by one, killed everyone in town." Anna—who prefers to be called Anastasia—is a slightly spooky and complicated high school girl with a penchant for riddles, Houdini tricks, and ghost stories. She spends much of her time writing obituaries for every living person in town. She is unlike anyone the narrator has ever known, and they make an unlikely, though happy, pair.Then a week before Valentine's Day, Anna disappears, leaving behind only a dress placed neatly near a hole in the frozen river, and a string of unanswered questions. Desperate to find her, or at least to comprehend what happened and why, the narrator begins to reconstruct the past five months. And soon the fragments of curious events, intimate conversations, secrets, and peculiar letters (and the anonymous messages that continue to arrive) coalesce into haunting and surprising revelations that may implicate friends, relatives, and even Anna herself.
1 Vote

Tweet
As Simple As Snow review by Little Willow