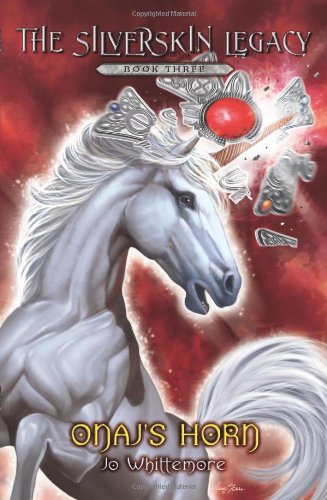 The Silverskin Legacy: Onaj's Horn
Jo Whittemore
Before Megan and Ainsley return to Earth, they are pulled into another fantastic adventure in the magical land of Arylon. During a political summit, Evren Sandor-a mage with a questionable reputation-holds up a golden cone and announces that he is their new leader. Incredibly, the spell works! The source of Evren's power is a magical horn that once belonged to a unicorn named Onaj. Megan and Ainsley believe another unicorn's magic will be enough to counteract Evren's spell. With help from a ferret named Brighton and Sir Inish the dwarf, they seek out the White Order of unicorns. Their leader, Anala, agrees to help them destroy Onaj's horn. But when they confront the evil mage, Anala and Ainsley succumb to the horn's power. Will Megan figure out what it takes to break the spell―something she's had inside her all along―before it's too late?
1 Vote

In this book, Megan and Ainsley, two teenagers from Earth, are transported to another world, the world of Arylon. Before they can return to Earth, they have to stop Evren from taking over all of Arylon. Unfortunately for them, Evren has the power to control people's minds. Megan and Brighton, a thief who has been cursed into the form of a ferret, are the only two characters who can resist the mind control. The three of them run around trying to undermine Evren.