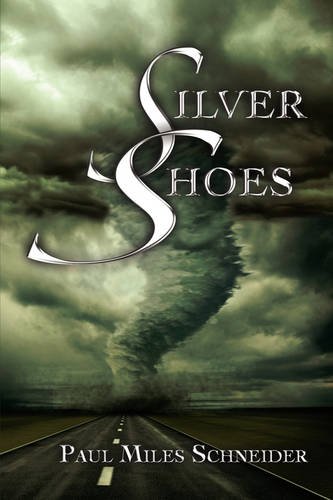 Silver Shoes
Paul Miles Schneider
WHEN DONALD GARDNER'S parents tell him they'll be taking an exciting road trip through Kansas, he openly cringes. He is sure it will be a boring summer vacation. But at one of their final roadside stops on the way home, they are approached by a poor woman offering to sell a curious item--an antique silver shoe. While Donald's mother is initially reluctant, she is ultimately smitten with the shoe and buys it. Donald is skeptical that the shoe is anything more than a relic, but when the new school year starts, he brings it in for show-and-tell, attempting to impress his classmates. His friends liken it to something out of The Wizard of Oz, and his teacher agrees the idea is not far-fetched considering author L. Frank Baum wrote about silver shoes, not ruby slippers, which were strictly in the movie. Yet when he accepts a dare from his two best buddies to try it on, frightening and incredible things begin to happen. Strange animals cry out in the night. Dark, shadowy shapes lurk in distant corners. Scratching sounds are heard just outside his bedroom window. And when he meets George Clarke, a reclusive man who has been in hiding and on the run for many years, Donald finds out there is a lot more to Baum's story than he thinks. Join Donald as he unravels Baum's earth-shattering secret in Silver Shoes.
1 Vote

Donald Gardner's family takes a summer road trip through Kansas, which is the most boring way Donald could imagine spending his summer. On their trek home, his family is on its last roadside stop when Donald's mother meets a poor woman. To get money, this poor woman sells the only thing she has to Donald's mother: a single silver shoe. When the school year begins, Donald brings the shoe in to show his classmates, and the connection between The Wizard of the Oz by L. Frank Baum and the shoe is made. One girl from his class relates how in the book by L.