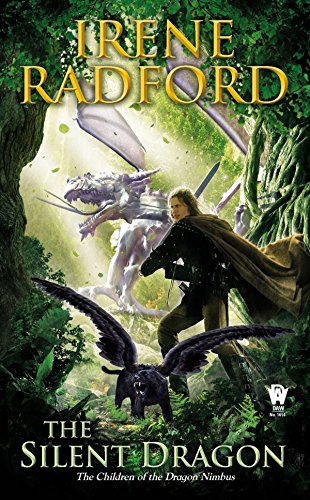 The Silent Dragon
Irene Radford
In a realm on the brink of war, will an unsuspected heir to the kingdom of Coronnan and to magic long-banished from the land offer the only hope for survival?Glenndon--son of witchwoman Brevelan and Jaylor, Senior Magician and Chancellor of the University of Magicians--has never spoken aloud. He has no need because his telepathic talent is strong and everyone associated with the University can "hear" him. He can throw master-level spells, but because he will not speak, Jaylor has refused to promote him from apprentice to journeyman magician. Still, everyone knows it is only a matter of time until Glenndon will take his rightful place at the University.Then an urgent missive arrives from King Darville. The Council of Provinces is near rebellion over the king's lack of a male heir. Rather than see his fourteen-year-old daughter, Rosselinda, married off just to procure an heir, he orders his illegitimate son Glenndon to Coronnan City to become his successor. And suddenly Glenndon's world is in chaos. The man he's always known as his father is not. Instead he is the son of the king. But in this city where court politics can prove deadly and where magic is forbidden, the young man must hide his talents even as he struggles to find his voice and his destiny.And one slip could see Glenndon, Darville, Rosselinda, and even Jaylor doomed, for the lords and the people fear magic more than potential invasion, legendary monsters, and civil war.
1 Vote

Glenndon is just a lonely farmboy living with his family... But also being trained by his "Da" as a master magician. Glenndon also is reaping the effects of a childhood disease that stole from him the ability to speak. Therefore he relies on "thought speak" for all his conversation. However things take a drastic turn when he is summoned by the King .... As his hopeful heir! Confused and now more alone then ever, he trains to be in the court and to be a prince.