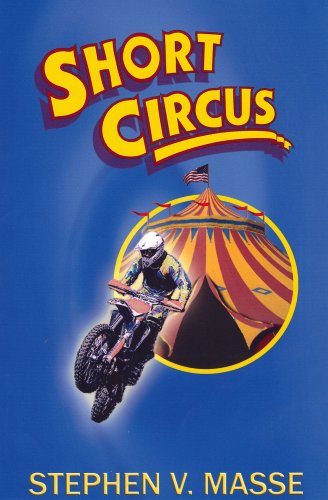 Short Circus
Stephen V. Masse
Jem Lockwood has been fatherless for four years and finally gets a Big Brother, but just as the best summer of his life is about to begin, he discovers that Jesse Standish's rented house is about to be sold. Jem does all in his daring imagination to make Jesse's house unmarketable. This three-ring circus romps with Jem's boyhood friends and older brother Chris, all recognizable kids who share in the rough-and-tumble delight of living in a Massachusetts city whose newspaper is delivered by kids on bikes, where kids play in the streets, and the local convenience store is owned by the family of Jesse’s girlfriend, Andrea. Meanwhile the city’s swimming pond has been sabotaged, and the city has to close it to all recreation after two boys are injured. Jem is sure he knows who did it, and helps carry out a plan to punish the evildoer.
2 Votes

Jem Lockwood has just got back to school and his first task is to write a report on his summer vacation. Short Circus is Jem's story about all of the adventures he went on with his friends and famliy. Jesse Standish is Jem's older brother through the Big Brother Association and he may be forced to move. That is one of Jem's problems along with someone destroying the swimming pond, and problems among his friends. Will Jem even make it through the summer?

Jeremy (Jem), is back at school with an assignment to write about his summer. Short Circus is Jem's story. This book is action packed with stories of dirt bike contests, camping trips, and trips with Jesse, Jem's "Big Brother", from the Big Brother Association. When Jem and his friends find out that Jesse might have to move, they make a plan to keep his house from being sold. Even after school starts, Jem continues to write about his life and his adventures with his friends.