Shipwreck at the Bottom of the World 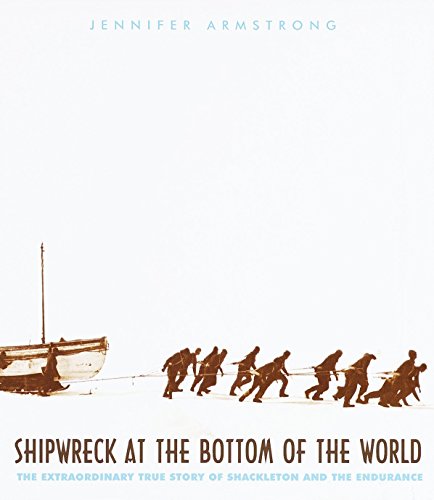 Shipwreck at the Bottom of the World
Jennifer Armstrong
The harrowing story of the ill-fated Endurance, now in paperback.In August 1914, Ernest Shackleton and 27 men sailed from England in an attempt to become the first team of explorers to cross Antarctica from one side to the other. Five months later and still 100 miles from land, their ship, Endurance, became trapped in ice. The expedition survived another five months camping on ice floes, followed by a perilous journey through stormy seas to remote and unvisited Elephant Island. In a dramatic climax to this amazing survival story, Shackleton and five others navigated 800 miles of treacherous open ocean in a 20-foot boat to fetch a rescue ship.Shipwreck at the Bottom of the World vividly re-creates one of the most extraordinary adventure stories in history. Jennifer Armstrong narrates this unbelievable story with vigor, an eye for detail, and an appreciation of the marvelous leadership of Shackleton, who brought home every one of his men alive.
1 Vote

Tweet
Shipwreck at the Bottom of the World review by SHC

In 1914 Ernest Shackleton, a famous artic explorer, puts together a team of 27 men to become the first to the cross barren wasteland that is Antarctica. Just after they get into the icy waters surrounding Antarctica they find it is to close to proceed and htey are trapped!