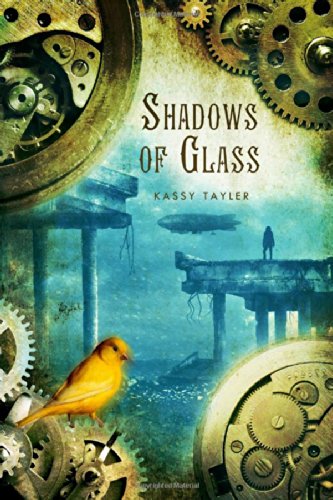 Shadows of Glass
Kassy Tayler
Wren's world has changed. The thing that she fought for, escaping the dome has come to fruition, but it's not the paradise she thought it would be. Most of the shiners have died, and according to James, she is to blame for many of the deaths, a burden which sits heavy on her shoulders. Still some have survived and Wren is determined to keep them safe as they fight to establish a home outside while hiding from the rovers who have weapons that can kill from far away. But as long as she has Pace she knows everything will be fine. Still Wren wonders, as she sees the smoke that continually pours forth from the dome, how did her friends inside fare? Will they ever find out if Lucy, David, Jill and Harry, along with Pace's mother survive the explosions?Meanwhile, someone else has also seen the smoke. A band of explorers from across the sea arrive in an airship, curious about the dome, and offering help to those who survive. When Wren meets the handsome Levi Addison, she suddenly questions her love for Pace as Levi offers to show her the world from his airship. Does she really love Pace? Or was it just the circumstances that made her think she did? Meanwhile, word arrives from inside via Pip, and Wren is forced to go back inside the dome, a thing that terrifies her more than anything else, to save her friends. Once she's back inside will she be able to escape again? Kassy Tayler's Shadows of Glass is a whirlwind of adventure, romance, conspiracy and the struggle to stay alive in a dystopian world where nothing is as it seems.
1 Vote

In the second book of the series, Wren is finally free of the dome, but the outside world is not the paradise everyone thought it would be. She constantly blames herself for the deaths of many of her friends and is determined to protect those that have survived. This becomes a problem when they encounter rovers, who have weapons that can kill from a distance. Not only does Wren worry about the people she strives to protect, she also worries about the ones still inside the dome. Did they survive the explosions that flooded the mines?