Shadow of Darkness: Volume I of the Creature Kid Series 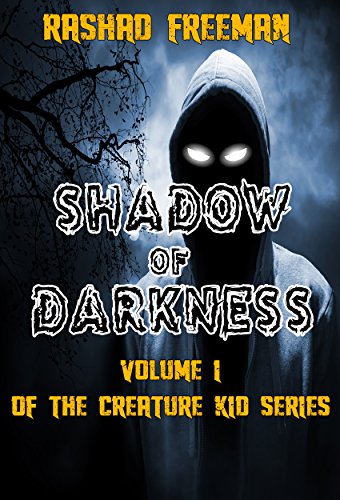 Shadow of Darkness: Volume I of the Creature Kid Series
Rashad Freeman
You have been warned. The human race has been coddled, protected by an ancient species, in a multi-dimensional war that spans centuries. Under this umbrella, the people of Earth have thrived, ignorant of the threat looming just out of sight. This umbrella, this safety net, woven together from the lives of the fallen, will protect them no more. Our story begins in the small town of North Shore. A place known for its tropical climate and year round beaches. An unlikely place to find the savior of a war that is still undiscovered. Anthony Dimair doesn't know it, but he may be the last hope for Earth. Or, he may be the cause of its ruin. A darkness that has been buried deep inside of him for years, is slowly brewing to the surface, itching to find its way out. Can this teenage boy and his friends uncover the secrets before it's too late? Can they solve the riddle before the entire town is consumed by the Shadow of Darkness?
1 Vote

Tweet
Shadow of Darkness: Volume I of the Creature Kid Series review by scifiguy

Shadow of Darkness by Rashad Freeman is an exciting story about a young boy named Anthony who discovers he has wings on his first day of high school. He tries to keep the secret to just him and a few of his friends, but the wings keep springing out at random times. Anthony also cannot control the wings to help himself fly. Then mysterious things start to happen. Anthony and his friend witness another friend being captured by mysterious men. Then his room is searched by random police officers. He travels to meet his uncle who lives in Colorado.