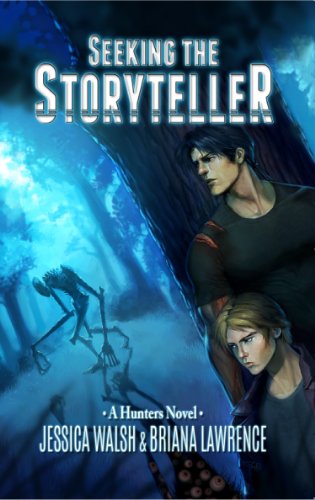 Seeking the Storyteller
Jessica Walsh
I know of the Storyteller, it whispers into the man’s ear, I’ve met him. If you promise not to kill me, I’ll take you to him. Alix Andre DeBenit and Randall Fagan are Hunters, part of a hidden network of humans who track and kill the monsters lurking in our world so everyone else can pretend they don’t exist. But when a living shadow mentions someone called the Storyteller, Alix hesitantly decides to learn more. They say the Storyteller lives in a massive library full of books that tell every being’s life story. He can read these books, rewrite them and change anything he wants, even if it’s already happened. That’s the power Alix wants, the power to bring his murdered family back and he’s determined to make the Storyteller do it. He just has to decide if working with the very creatures he’s supposed to kill is worth it.
1 Vote

Regarding the question “Are we alone?” Alix DeBenit found the answer the hard way.  After Alix’s fiancé and unborn baby girl are murdered by a powerful demon, Alix becomes a Hunter. With help from the handsome rouge Fagan and a uncontrollable demon named Dox. Alix begins the quest for the “Storyteller”. The Storyteller is mythical demon who possesses a book which contains every story ever told—including the one of Alix. Legend has it that, if the Storyteller chooses to, he can rewrite any story.