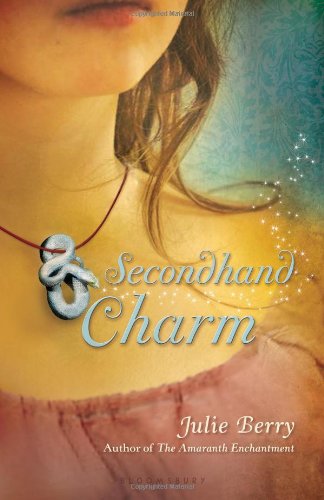 Secondhand Charm
Julie Berry
In a secluded village, magic sparkles on the edges of the forest. There, a young girl named Evie possesses unusually strong powers as a healer. A gypsy's charms-no more than trinkets when worn by others-are remarkably potent when Evie ties them around her neck. Her talents, and charms, have not escaped the notice of the shy stonemason's apprentice. But Evie wants more than a quiet village and the boy next-door. When the young king's carriage arrives one day, and his footman has fallen ill, Evie might just get her chance after all . . .Berry's debut novel garnered glowing reviews and strong sales-and now she's done it again with a beautifully woven tale to keep all readers, young and old, absolutely charmed.
1 Vote

In Secondhand Charm, by Julie Berry, Evie lives a quiet life in a small village with her grandfather. She's the village healer, the person everyone turns to anytime there's an illness or emergency. One day, the village receives word that the king is coming, to see the famous feast of Saint Bronwyn. The village reacts with shock, since the villagers weren't even sure if they were going to have such a feast. They very quickly clean up the town in order to make it presentable for the king. The day the king is set to arrive, the villagers gather to await his arrival.