A Scholar of Magics 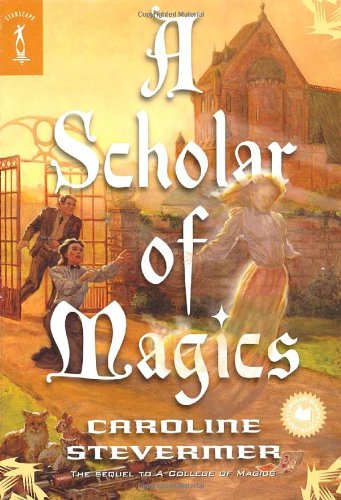 A Scholar of Magics
Caroline Stevermer
Glasscastle University--on the surface, one of the most peaceful places in England. But underneath, its magic is ancient and dangerous… American Samuel Lambert, sharpshooter, adventurer, late of the Wyoming plains and Kiowa Bob's Wild West Show, has been invited to Glasscastle University in England to contribute his phenomenally accurate shooting eye to the top secret Agincourt Project. The only dangers he expects to face are British snobbery, heavy dinners, and tea with the Provost's pretty wife. But when the Provost's stylish sister, Jane Brailsford, comes to town, things get much more exciting….This sparkling sequel to A College of Magics is a whirlwind of secret weapons, motor cars, mysterious assaults and abductions, thugs in bowler hats, and a mild-mannered don who is heir to a magical power greater than all of Glasscastle's.
1 Vote

Samuel Lambert, an American, is invited to stay on in Glasscastle University which teaches magic when he wins a sharpshooting contest. He was hired to contribute his shooting accuracy to the mysterious Agincourt Project. A Fellow of the University named Fell invited Lambert to share a room with him and Lambert discovered the amazing, peace-giving chants that maintain the University's wards. Then, one day, the Provost's sister, Jane Brailsford, comes to visit. After she arrives, things start happening. Fell disappears and the Agincourt Project develops a sinister side.