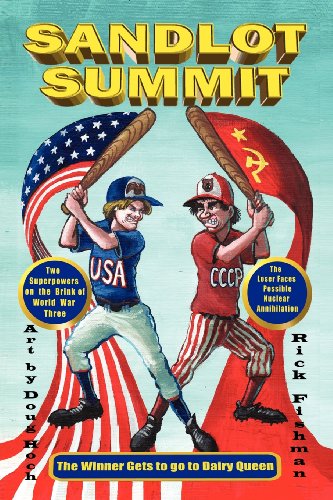 Sandlot Summit
Rick Fishman
FUNNIEST SPORTS STORY EVERGet ready to "LOL" with the funniest, most entertaining youth sports story of all time.It's 1984 ¿ and the cold war between the United States and the Soviet Union is heating up to a fever pitch. With combat a near certainty, President Ronald Reagan and the infamous Russian General, Kostlitzo "BoneFace" Zolotov, make a secret pact to settle differences, not by fighting a war, but instead, by playing a kids' baseball game. Felix Farley, a dedicated, but often bumbling coach, is accidentally chosen to lead the American squad and quickly discovers he is in way over his head. But there's no turning back. He and his young ballplayers must find a way to save the free world from conquest by what President Reagan calls the "Evil Empire".
1 Vote

Sandlot Summit is a great fictional story. It is about two teans [American and the Soviet Union]playing baseball. During 1984 President Regan and famous Russian General Kostilo' Boneface' Zolotov have young baseball players. Each team must battle for their own country.The teams are playing baseball instead of fighting a war. Whoever wins the baseball game wins the war.