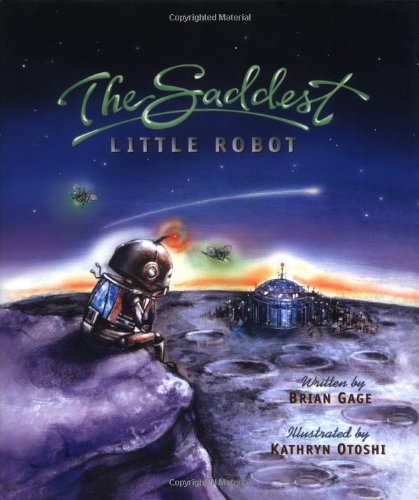 Snoot is a Drudgebot, and a confused one at that. He can’t figure out why the Halobots, who run Dome City, get some much extra light (all robots need light to survive). He thinks so much about this he gets easily distracted and is consequently the least productive of all robots. He is also oddly shaped and the others make fun of him. Curious about what exists in the awful darkness outside the Dome, he ventures forth and discovers that all it not as it seems. Snoot vows to restore equality to Dome City. With guile, cunning, and good old-fashioned courage, Snoot, aided by some special friends, returns to Dome City to free the Drudgebots.In both story and illustration, The Saddest Little Robot evokes and utilizes the styles of sci-fi books and films, manga, movie posters, comics and animated films. It encourages readers to look beyond what lies on the surface, to discover for themselves that things are not always as they seem; most important of all it shows them that they are strong enough to decide to do something about it. As Snoot does. And the saddest little robot becomes very happy indeed.
2 Votes

Snoot is a robot or more specifically a Drudgebot, but he does not llok like the other Drudgebot, he is smaller and not made of bronze. Some Drudgebots are required to plug into a cylinder to preform math problems to charge the city in which they live and to supply the valuable light to all the robots. The Drudgebot are under the command of the Halobots, Guardbots, and Father Screen, the leader of all the robots. There is a unspoken question that all of the Drudgebots have. Where do the Halobots, Guardbots, and Father Screen live?

What's this?
The Saddest Little Robot review by JP

The book, The Saddest Little Robot, is about a world where robots live in peace in a huge dome. Or so the Drudgebots, robots who create the life-giving light, believe. Except for one little robot named Snoot. He questions the authority of the Guardbots and the Halobots while admiring them at the same time. At first, he desperately wants to become a Halobot, with golden armor instead of the junk used to create him. One day, he travels outside the dome.