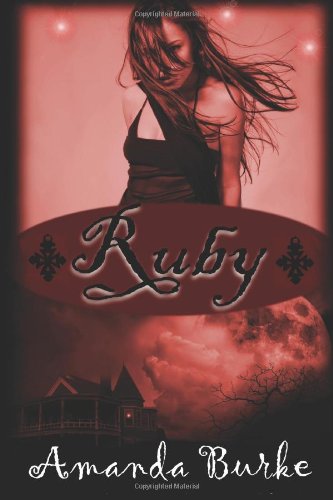 Ruby
Amanda Burke
Publisher: Solstice Publishing Printer: Createspace ‘During the Salem witch hunts, an evil witch named Natasha Sullivan tricks a demon into confining himself inside an enchanted music box. She casts a spell that foretells that the demon will emerge in an unknown time in future after the birth of a child known as the Lumen Child. This child’s destiny is to bring light to the planet and Natasha knows that if he is killed then darkness will prevail. Natasha’s identical twin Sarah, discovers what her sister has done. Although she cannot break the spell she casts her own prophecy. It states that three witches known as the Triple Enchantresses will be born in the same time as the Lumen Child and they will be his supernatural protectors. The girls are not sisters, yet they will share a common destiny. Ruby is the story of the first witch and how she very nearly dies before discovering her true identity. Having grown up unaware of her powers, she is rescued by her loving grandmother who is also a white witch and taken back to the family estate where she learns everything she can about what her future holds. Ruby is the first in a four book series.’
2 Votes

Ruby was a normal girl.........Then her father was murdered. She then went in search of her grandma who informed her that she came from a long line of witches. Her life is turned into days of learning of powers, tracking down an evil group of warlocks, and the boy of her dreams.

What's this?
Ruby review by CHint1211

Ruby is a book about a girl named Ruby who has a gift. This gift is not one that she knew of for most of her life, only recently has her gift arisen in her. Ruby is special, her gift provides her with abilities beyond human capabilities.She was known as a witch. Ruby is a witch from one of the most powerful witching families in the world, the Sullivan clan. As a child, she and her grandmother would practice magic, but when her father found out, he took her and forced the grandmother to plant a spell that stops Ruby from using her powers.