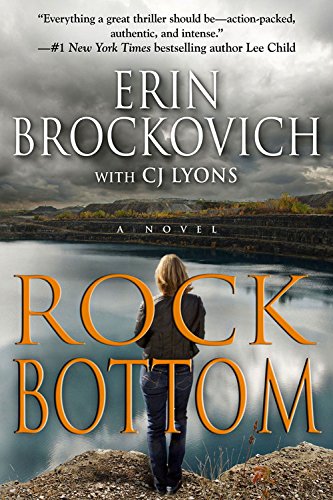 Rock Bottom
Perseus
From New York Times bestselling author and internationally renowned environmental and consumer advocate Erin Brockovich comes Rock Bottom, a debut thriller and first in a series of novels that introduces one of the most fascinating and memorable characters in suspense fiction.Ten years ago, a pregnant seventeen-year-old, Angela Joy Palladino, fled her hometown, Scotia, West Virginia, as a pariah. Over time, AJ succeeded in establishing herself as an environmental activist, dubbed “The People’s Champion,” only to be forced to retreat from the spotlight in the wake of a crushing media disaster.When AJ is offered a job with a lawyer who is crusading against mountaintop removal mining, she is torn. As a single mother of a special needs nine-year-old boy, AJ can use any work she can get. But doing so will mean returning to the West Virginia hometown she left in disgrace so long ago.Upon arriving in Scotia, AJ learns of the sudden death of the lawyer who hired her. Soon after joining forces with his daughter, Elizabeth, threats begin to surface, bodies begin to pile up, and AJ discovers that her own secrets aren’t the only ones her mountain hometown has kept buried. Hitting rock bottom, AJ must face the betrayal of those once closest to her and confront the harrowing past she thought she had left behind.In Rock Bottom, Erin Brockovich combines passionate intensity, first-rate storytelling, and her real life experiences in a novel that will leave you breathless.
1 Vote

Rock Bottom is about AJ who teams up with a lawyer to bring down a big coal mining company in a small town. The small town happens to be AJ's hometown that she left ten years ago. The company's coal sludge is contaminating the local water supply and the company is destroying the mountain top causing environmental problems. The lawyer dies before AJ begins to work with him. When lawyer's daughter gets death threats because of his actions, AJ comes to her aid.