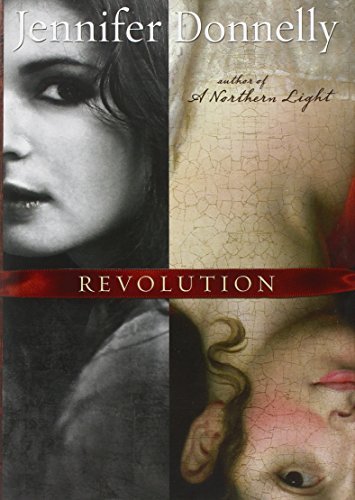 Revolution
Jennifer Donnelly
Readers of If I Stay and Elizabeth George will love Revolution by Jennifer Donnelly, author of the award-winning novel A Northern Light. Revolution artfully weaves two girls’ stories into one unforgettable account of life, loss, and enduring love; it spans centuries and vividly depicts the eternal struggles of the human heart.BROOKLYN: Andi Alpers is on the edge. She’s angry at her father for leaving, angry at her mother for not being able to cope, and heartbroken by the loss of her younger brother, Truman. Rage and grief are destroying her. And she’s about to be expelled from Brooklyn Heights’ most prestigious private school when her father intervenes. Now Andi must accompany him to Paris for winter break. PARIS: Alexandrine Paradis lived over two centuries ago. She dreamed of making her mark on the Paris stage, but a fateful encounter with a doomed prince of France cast her in a tragic role she didn’t want—and couldn’t escape. Two girls, two centuries apart. One never knowing the other. But when Andi finds Alexandrine’s diary, she recognizes something in her words and is moved to the point of obsession. There’s comfort and distraction for Andi in the journal’s antique pages—until, on a midnight journey through the catacombs of Paris, Alexandrine’s words transcend paper and time, and the past becomes suddenly, terrifyingly present.Praise for Revolution:An ABA Indies Choice Young Adult Book of the YearAn ALA-YALSA Top Ten Best Books for Young AdultsA Kirkus Reviews Best Book#1 Indiebound pick for fall 2010A School Library Journal Best BookA Bulletin Blue Ribbon BookA Chicago Public Library Best of the Best BookAmazon.com Best Book of the Year[STAR] "A sumptuous feast of a novel, rich in mood, character, and emotion."--School Library Journal, Starred[STAR] "Every detail is meticulously inscribed into a multi-layered narrative that is as wise, honest, and moving as it is cunningly worked. Readers  . . . will find this brilliantly crafted work utterly absorbing."--The Bulletin, Starred [STAR] "Brilliantly realized, complete, and complex. The novel is rich with detail, and both the Brooklyn and Paris settings provide important grounding for the haunting and beautifully told story."--Kirkus Reviews, Starred
1 Vote

Andi Alpers is having a tough senior year. After the death of her brother two years ago, she has been self-medicating herself on anti-anxiety pills and has started to slack off in school. The only thing that keeps her somewhat sane is music; playing guitar, studying famous musicians, and listening to her iPod are the only things that Andi has going for her. But when her absent father discovers that Andi has been slacking off so much that she might not graduate, he takes her to Paris with him so she can work on her senior thesis.