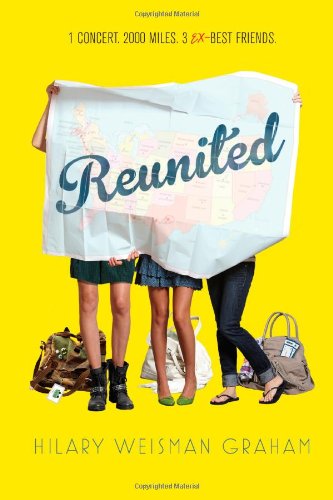 1 concert. 2000 miles. 3 ex-best friends.Alice, Summer, and Tiernan used to be best friends—as well as the self-proclaimed biggest fans of the band Level3. But when the band broke up, so did their friendship.     Now, four years later, they’ve just graduated from high school. When Level3 announces a one-time reunion show in Texas, Alice impulsively buys tickets and invites her two former friends along for the trip. Reluctant at first, both girls agree to go, each with her own ulterior motive. But old resentments and other roadblocks—from unintended detours to lost concert tickets—keep getting in the girls’ way. Will their friendship get an encore, or is the show really over?
2 Votes

The book that I am reviewing is Reunited by Hilary Weisman Grahman. The age level for this book is 12-15 years old. I really enjoyed this book.

What's this?
Reunited review by VBat

Alice, Summer and Tiernan were best friends in middle school, but their friendship ended badly freshman year. Now high school is over, and the three girls have completely different lives, with completely different priorities. Alice is waiting to be accepted to Brown. Summer is excited for a vacation with her boyfriend. Tiernan is grounded, as usual. However, when  their summer plans don't go as expected, the girls find themselves on a road trip to see the reunion show of their favorite band, Level3.