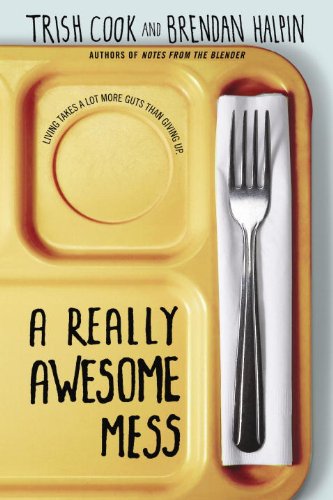 A Really Awesome Mess
Brendan Halpin, Trish Cook
A hint of Recovery Road, a sample of Nick and Norah's Infinite Playlist, and a cut of Juno. A Really Awesome Mess is a laugh-out-loud, gut-wrenching/heart-warming story of two teenagers struggling to find love and themselves. Two teenagers. Two very bumpy roads taken that lead to Heartland Academy. Justin was just having fun, but when his dad walked in on him with a girl in a very compromising position, Justin's summer took a quick turn for the worse. His parents' divorce put Justin on rocky mental ground, and after a handful of Tylenol lands him in the hospital, he has really hit rock bottom.Emmy never felt like part of her family. She was adopted from China. Her parents and sister tower over her and look like they came out of a Ralph Lauren catalog-- and Emmy definitely doesn't. After a scandalous photo of Emmy leads to vicious rumors around school, she threatens the boy who started it all on Facebook.Justin and Emmy arrive at Heartland Academy, a reform school that will force them to deal with their issues, damaged souls with little patience for authority. But along the way they will find a ragtag group of teens who are just as broken, stubborn, and full of sarcasm as themselves. In the end, they might even call each other friends. A funny, sad, and remarkable story, A Really Awesome Mess is a journey of friendship and self-discovery that teen readers will surely sign up for.Releases simultaneously in electronic book format (ISBN 978-1-60684-364-2)
1 Vote

A Really Awesome Mess is a wittily written novel following the antics of two teens shipped off to Heartland Academy, a place for kids with every color of the rainbow in mental problems. During their journey to peace and wholeness, the duo overcome feelings for one another whilst scheming and unknowingly bonding with a group of ragtag teens, including a young girl with anger problems, a compulsive liar, a mute, and a video game addict. It's a tale of admitting and accepting problems and allowing others to help with those problems.