Ready or Not : An All-American Girl Novel 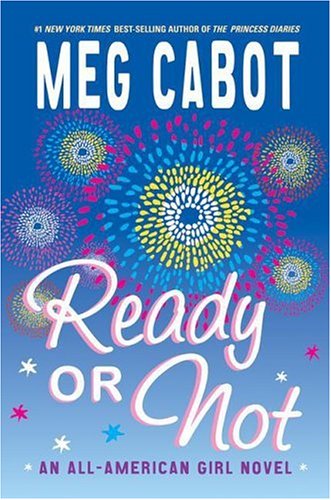 Ready or Not : An All-American Girl Novel
Meg Cabot
Top ten things Samantha Madison isn't ready for: 10. Spending Thanksgiving at Camp David 9. With her boyfriend, the president's son 8. Who appears to want to take their relationship to the Next Level 7. Which Sam inadvertently and shockingly announces live on MTV 6. While appearing to support the president's dubious policies on families, morals, and yes, sex 5. Juggling her new after-school job at Potomac Video 4. Even though she already has a job as teen ambassador to the UN (that she doesn't get paid for) 3. Riding the Metro and getting accosted because she's "the redheaded girl who saved the president's life," in spite of her new, semipermanent Midnight Ebony tresses 2. Experiencing total role reversal with her popular sister Lucy, who for once can't get the guy she wants and the number-one thing Sam isn't ready for? 1. Finding out the hard way that in art class, "life drawing" means "naked people."
1 Vote

Tweet
Ready or Not : An All-American Girl Novel review by MAs

Sam returns in this sequel to All American Girl busy as ever. She now has to contend with juggling school, art lessons, her duties as teen ambassador, and dating her boyfriend, David (the President's son). Sam is as hilarious as ever as she fumbles from one incident to another. How was she to know that taking a life drawing class meant drawing naked people? Or that despite dying her hair black she would still be recognizable as the girl who saved the President. On top of all her worries, Sam's parents insist she get a job, which creates some more interesting situations.