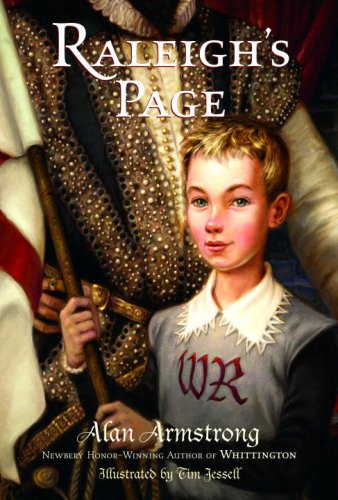 Raleigh's Page
Tim Jessell, Alan Armstrong
ANDREW HAS grown up near the Plymouth docks hearing the sailors talk about America. Knowing that Andrew's heart is set on going to the new world, his father sends him up to London to serve as page in the house of Walter Raleigh. In Queen Elizabeth's court, Raleigh's the strongest voice in favor of fighting with Spain for a position in the New World, and everyone knows that it's just a matter of time before Her Majesty agrees to an expedition. Can Andrew prove himself fit to go on an expedition to the New World?Meticulously researched and brilliantly crafted, combining fictional characters with historical, Andrew's tale offers up a vivid look at the cloakand- dagger politics of the time and a genuine feel for what it must have been like for the first Europeans to set foot on the beautiful, bountiful, savage shores of America.
1 Vote

This adventure takes place when the U.S. was called the New World by Britain. The protagonist, Andrew Saintleger, starts as a young boy of eleven, not knowing anything about the New World other than its rich farming soil and vast, unclaimed acres of land. When his father finds a job for him, he takes it on; but with caution. The employer is harsh, but perhaps his shell is different from his heart. As Andrew gains height and trust, his employer, Mr. Raleigh, begins to send him on more and more dangerous missions. Finally, he sends Andrew with a crew to Virginia.