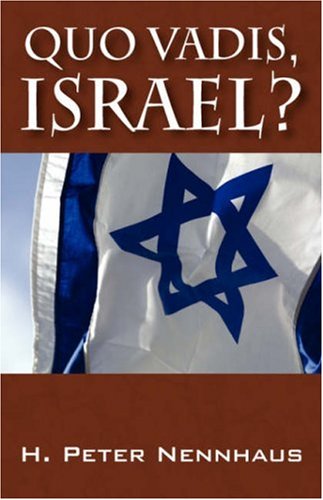 Quo Vadis Israel?
H Peter Nennhaus
SHOULD ISRAEL BE MOVED TO GREENER ACRES?The State of Israel has been involved in persistent belligerence ever since its birth. With clinical candor, author H. Peter Nennhaus addresses the dwindling probability of its ever achieving genuine peace. He also questions its permanence as an ethnically Jewish homeland. "For Jews and non-Jews alike," he says, "the State of Israel has become the source of disappointment and concern. The world has witnessed the never-ending tragedy that has befallen the Holy Land with its wars, bombings and intifadas and the United States, in spite of its unmatched influence, has been unable to resolve the crisis." He confronts this dark prognosis with a revolutionary new concept, which would transplant Israel to a more suitable land in Europe. It is a land, which due to exceptional circumstances may be available for purchase from its present owner and, unclaimed by any other country, would provide a permanent safe haven for a Jewish homeland. While such a radical move appears far-fetched and unrealistic at first sight, the arguments presented in its favor are fascinating and the reader will find them plausible and compelling.Quo Vadis, Israel? is an extraordinary appraisal of Israel's future and should be required reading for anyone who is concerned about unrelenting anti-Semitism and the seemingly impossible task of establishing peace in the Middle East.
1 Vote

Peter Nennhaus addresses a controversial subject when he talks about moving Israel to a different, possibly better, place in Europe. It would be a permanent place for Jews to settle, and where they would be able to live in peace. While such a radical move seems unrealistic, when you hear the arguments in its favor you will be forced to consider them and admit they are not as far-fetched as they seemed at the beginning. And if Israel were to move, would we finally have the peace in the Middle East that we have been wanting for so long?