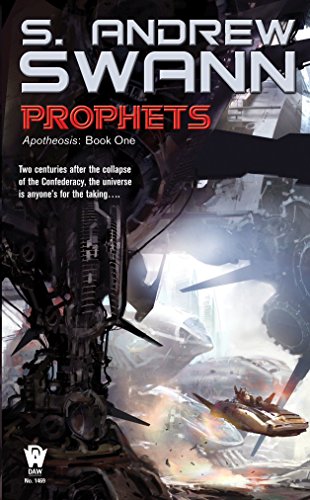 Prophets: Apotheosis: Book One
S. Andrew Swann
It’s been nearly 200 years since the collapse of the Confederacy, the last government to claim humanity’s colonies. So when signals come in revealing lost human colonies that could shift the power balance, the race is on between the Caliphate ships and a small team of scientists and mercenarys. But what awaits them all is a threat far beyond the scope of any human government.
1 Vote

Something is going on with the supposedly uninhabited planet Xi Virginis. An egg sent out by humans to see this planet has disappeared without a trace. The Roman Catholic Church and the rest of the universe decide to intervene and see what is going on with this planet. Enter Father Mallory, Nickolai, Jusuf Wahid and Julie Kagura, the team assembled to find out what is going on. Mallory is sent by the Roman Catholic Church and is posing as ex-staff sergeant Fitzpatrick. Nickolai is an alien prince who has super-human strength. Wahid and Kagura both posess exceptional skills with weapons.