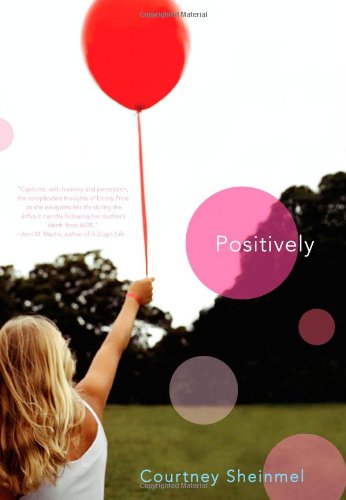 Positively
Courtney Sheinmel
Since the day Emerson Pressman and her mother were diagnosed as HIV positive, nothing has been the same. When her mother dies of AIDS, Emmy has to go live with the father and stepmother she barely knows, and she feels more alone than ever. Now she has to take pills by herself, and there is no one left who understands what it's like to be afraid every time she has a cold. But when her father decides to send her to Camp Positive, a camp for HIV-positive children, Emmy begins to realize that she's not alone after all, and that sometimes, opening up to other people can make all the difference in the world.
1 Vote

"When my mother died, I imagined God was thinking, 'One down, and one to go.'" This is how Emerson Price feels when her mother passes away. Her mother was sick for a long time with a disease known as AIDs. Emmy is HIV- Positive, she takes pills everyday and visits the doctor all the time. She becomes a different person when her mother dies- angry, moody, upset. Her father and his expectant wife Meg, decide to send Emmy to Camp Positive hoping to help Emmy become herself again. Camp Positive is for people like Emmy, those who are HIV-Positive.